Social media has been bombarded with ‘sponsored’ adverts from companies all over the world, offering items that may, at first thought, be an ideal purchase or present For you or someone else in your life. These include ‘kitty style knuckle dusters (see picture above), mini kubotan key chains, folding knives that retract into an innocent looking key ring etc. A generic police definition of what constitutes an offensive weapon is,

”Any article made or adapted for use for causing injury to the person, or intended by the person having it with him for such use by him, or by some other person.”

Possession of an offensive weapon is still illegal in Britain regardless of whether clever marketing states that it is a key ring or not. Weapons such as knuckle dusters, kubotans (Japanese short metal baton held in the hand, using both ends to apply a strike) and the like are MADE for causing injury. The sellers of these items will promote them as a keychain first and foremost but they are still illegal to possess in public.

(One of the many styles of ‘Kubotan’ on the market being advertised as a keychain, but, if used properly, can cause serious injury to the person).

Let us get back to the typical handbag.

On a night out or a day at a festival, what do you carry, apart from cash, credit cards and mobile phone?

Often now, at Jersey festivals, where search upon entry procedures are carried out, your ticket sets out the terms and conditions of entry. This will include the obvious as in no alcohol, no drugs, no offensive weapons etc. It may also stop people bringing in their own furniture (folding chairs, benches etc.). More and more now it also states that you cannot bring in perfume bottles and aerosols ie deodorant in spray form. While under normal circumstances, deodorants and perfumes are used in the conventional sense, these items could also be used as weapons (ANY ARTICLE ‘INTENDED’ FOR USE AS AN OFFENSIVE WEAPON) either by spraying them in people’s faces or by using a lighter with either to create a mini flame-thrower. At the last festival that I worked on, we could have filled a perfumery with the amount of bottles that we had to relieve people of, despite the terms and conditions being quite clearly set out.

There are also times that people have returned to Jersey on the boat from France having quite innocently purchased Mace** or a similar spray for use as a self defence deterrent. Unfortunately, this type of spray is illegal to possess in Jersey (and the rest of Great Britain) as well as being illegal to import.

Mace (Chemical Mace) was the first of its type to be produced but there are now many derivatives available on the market through internet sellers. Check your country’s laws on possession before committing to buying these products online.

**Mace is the genericised trademark of Chemical Mace, the brand name of an early type of aerosol self-defence spray invented by Allan Lee Litman in 1965. The first commercial product of its type, Litman’s design packaged phenacyl chloride (CN) tear gas dissolved in hydrocarbon solvents into a small aerosol spray can, usable in almost any environment and strong enough (when sprayed in the face) to act as a credible deterrent and incapacitant. Its popularity led to the brand name being shortened to simply “Mace” for all defense sprays (regardless of the composition).

(taken from the Wikipedia webpage on MACE) 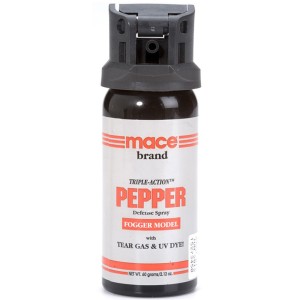 Let us look at the three designations that form the basis of the offensive weapons Law.

On a website for a legal firm Lawton’s Law (www.lawtonslaw.co.uk) they set it our as follows:

What is classified as an offensive weapon in UK law?

Those where objects are MADE for use for causing injury to the person. These items are legally classified as ‘offensive weapons per se’ and include flick knives, kitchen knives**, butterfly knives, pepper sprays, knuckle dusters, Kubotans (ed.) and nunchaku (rice flails as used in the Bruce Lee film ‘Enter the Dragon – ed.)

Those where objects are ADAPTED for such a purpose, i.e. to cause injury to a person. This includes items that would otherwise be incapable of causing injury but have been changed so that they now can, for example a sock containing a snooker ball, a sharpened stick or a sharpened snooker cue, a baseball bat with nails added or a water pistol filled with acid.

Those where objects are not so made or adapted but carried with the INTENTION of causing injury to the person, for example a cup of bleach carried with the intent of throwing it into someone’s face to cause injury, sharpened nail scissors or a baseball bat. 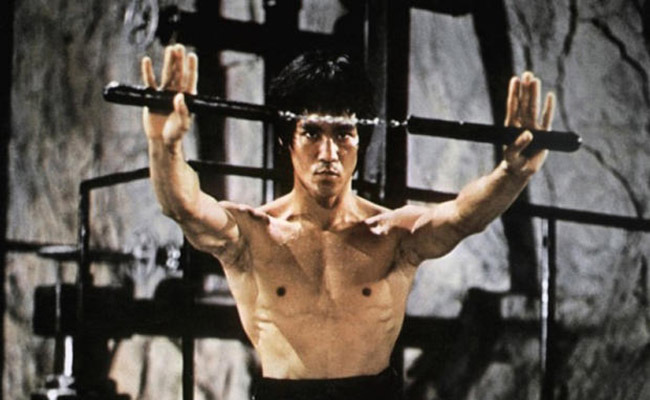 (The late actor, Bruce Lee, in a scene from ‘Enter the Dragon’, using nunchaku also commonly known as rice flails, as they were originally used in rice farming)

Most items in your handbag are innocuous and are essential to one’s personal carry every day. If you are unsure whether an item that you wish to purchase could be classified as an offensive weapon and that by being in possession of it, you may fall foul of the law, contact your local police station and ask.

Or simply contact me, the Urban Warrior Princess, at roisin.pitman@hotmail.co.uk and I can advise you.