It is my great pleasure to introduce to you my ‘guest blogger’. I have been following Don Roley’s posts for some time now and he always speaks a lot of common sense on the subject of martial arts and practical everyday self defence.

A full biography about Don can be found at the bottom of his blog post and I thank him for giving me the permission to reproduce his words on my site. 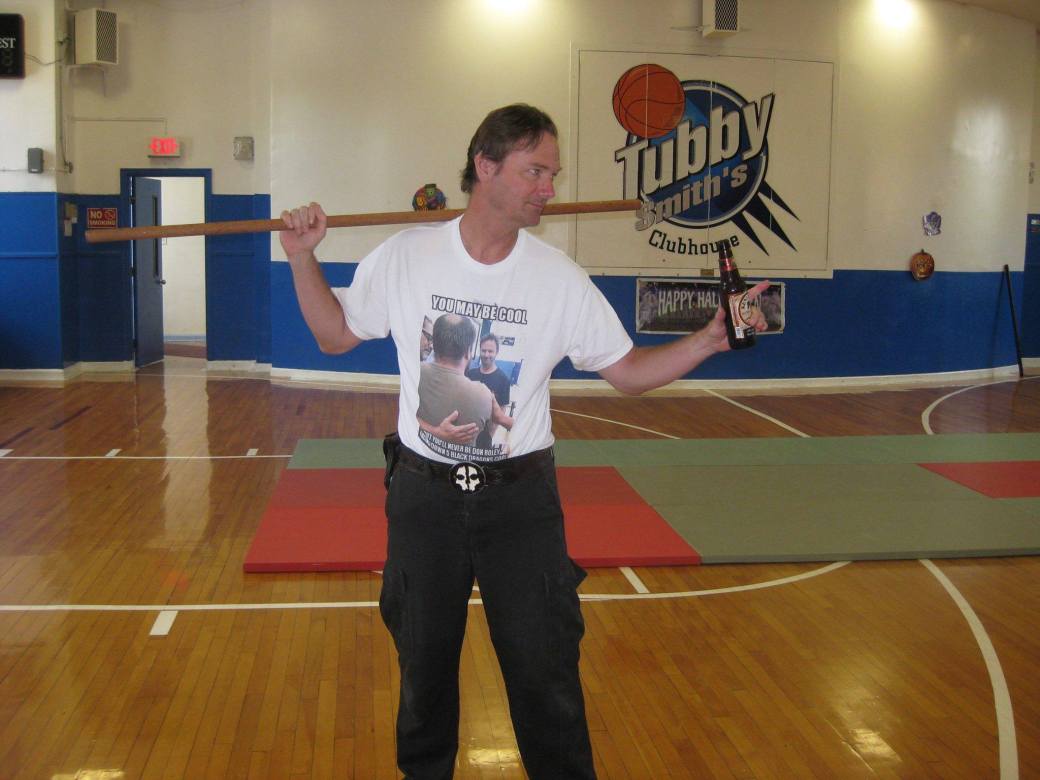 Among the forgotten lore of self defense there is a little secret. Self defense isn’t about beating the other person to a pulp. It is about getting home safe.

We are mammals, descending from pack animals. Look at a band of gorillas and you will find one that has fought all the beta males and now is the only one to pass on his genes to the next generation. Even mammals further from us like deer fight other males for the right to breed.

In these fights, the would- be alpha male has to defeat his challengers. Most mammals have it easy. The rules are simple, you defeat members of your own species and either kill or run away from other species. The lion doesn’t kill other lions and the deer runs as soon as it spots a predator. But we humans might find another human coming at us with a knife in his hand and murder in his eyes. Or it might be a school yard fight to see who is going to be the big man on campus. Treating one like the other can be deadly.

Much of what is touted as self defense training now seems to be complicated versions of the fight to become the alpha male of the tribe. That isn’t self defense. The name coined for it is social violence. It is what young boys do in the schoolyard. There are unspoken rules against things like using weapons or doing things that will leave permanent damage. It isn’t self defense, it is a dick- measuring contest. Break the unspoken rules and your social situation becomes much worse than if you merely lost.

As I said, this isn’t self defense. When the crazy ex-boyfriend of your lover tries to corner you with a knife, that is self defense. When he confronts you at a party and you stand there and trade insults with him, any fight that happens after that is merely two idiots trying to impress the crowd with their manliness.

Self defense is about getting home safe. That means in the party scenario that as soon as you see that things could get violent, you get the hell out of there.

Mind you, you will be fighting a million year breeding program telling you that if you don’t stand there and defeat your rival, you will never get a chance to pass on your genes.

If you get into a violent encounter, defeating the enemy isn’t your prime goal if you are really talking about self defense. Unless you are a police officer or security guard, the need to wrap your opponent up and choke him out is a very distant second to getting the hell out of there. And yet many styles heavily dependent on competition train their students to think only of defeating the other person.

I had two female students in my class last night. Together they weigh just about the same as me. And I am not a huge guy. If a 320 pound kidnapper tried to pull them into a van, maybe their skills would be good enough to defeat him, especially if they use surprise, strategy and trickery. But their best bet is to fight only long enough to trip him so they can turn and run as fast as they can, screaming all the way.

And yet, people are being trained in that case to follow up with the other person falling to do a ground and pound. That isn’t just not self defense, it isn’t smart as well.

Yes sometimes you do have to stand your ground. When the vengeful ex-lover breaks into a woman’s house and starts moving towards the rooms of children he vowed to kill to hurt her, a woman will stand her ground. The thing is, she will probably die happily in that case if she can take the would- be murderer with her before he can reach her kids.

When you talk about a ‘self defense’ scenario with some people and ask why you don’t just walk away before trouble starts or run as soon as it does, it is amazing to find out how many people are always accompanied by dozens of crippled relatives who can’t move faster than a shuffle. Really? It astounds me that most of the people claiming to do self defense seem to spend more time talking themselves out of walking away than from getting into a fight.

This came up recently when a discussion of whether taking a person to the ground who has a knife is the best way to deal with the situation. For the record, going to the ground when the other person has a knife is a very bad idea. Take someone that knows even a little about how to use a knife, give him a marker and try it out yourself sometime to prove this to yourself. Every mark on you has a good chance of killing you if it was a blade, or at least crippling you.

When this was pointed out, the other side responded with the argument, “Well, how can you really hope to defeat such an overwhelming advantage as a knife? At least you have your best chance of immobilizing him if you use BJJ.”

See the trap they let their mindset fall into? Do you sometimes have to injure or kill someone with a knife to make it home alive? Possibly. But if you really are interested in surviving a knife attack, the odds are much better if you do something like jump back and around until you can grab a chair or something to toss at the guy long enough to gain some real distance and then run faster than an olympic sprinter. You don’t defeat them, but you survive. Surviving is what you should be thinking about first in a knife attack, not how to defeat them. And the scary thing is, some criminals are training themselves to pull a knife in the middle of a fight or when you won’t notice. You think you are in a fist fight, but end up stabbed to death. With this reality, shouldn’t we start to look at any fight we walk into as being a possible knife attack rather than just a way for two beta males to figure out who the alpha will be?

Getting away from danger, as opposed to beating the enemy, starts long before the first blow is thrown. If you are in a fight and get a chance to run, then you should take it if you can. But when someone at a bar starts giving you the hairy eyeball, why stick around? Are you afraid you won’t be able to pass along your genes that night in some way? If you don’t finish your drink and leave, you increase your chances of maybe ending up in the ER with a knife wound or worse. If they insult you and you insult them back, anything from that point on is a mutual dance and not self defense. For self defense you would have to take the insult and walk away. If they try to chase you down at that point and force a fight on you then you can say you were defending yourself. If the fight isn’t forced on you, but you stood there until he threw a blow, that is just two guys trying to figure out who is the alpha male at best. At worst, it could be a criminal trying to set you up to be knifed.

And yet, look at the people attracted to many types of arts that claim to teach self defense. They are the spitting image of the term, “Young, dumb and full of cum.” They want to prove themselves, show the world they are the alpha male. And they aren’t being told nor trained to get out of there when they can. They are being conditioned to always dominate the other and prove their manhood. They don’t go through training where at the end they have to get away. Instead they are frequently in competitions to defeat the other person, or it is a loss.

Running away isn’t losing in self defense. Beating the other guy up isn’t winning very often. Talk with some of my friends that are violence professionals and they will point out the scars and parts of their bodies that no longer work 100 percent to realize what real violence can cost even when you are the last person standing.

You can’t just give lip service to avoiding danger, walking away or running. It has to be constantly emphasized and trained at. Students have to go through scenario training where they walk across the street to avoid someone giving them menacing looks. They have to have sparring where the goal is to get away and not put the other guy in a unbreakable hold. They have to learn techniques that are useless in competition because they only let them survive and not defeat the opponent.

For too long, people have talked about self defense when they really are training to become an alpha male. It is getting to the point where that mindset dominates anything involving martial arts. It is time to step back and look at the situation and put the emphasis back into getting home safe over defeating another person.

Don Roley is the head of the Colorado Springs Bujinkan Dojo (USA) and previously lived for 15 years in Japan learning many arts, mainly the art of ninjutsu. Unlike the image presented by the unknowing and frauds, the combat portion of ninjutsu is commonly called Tonsogate, which translates into “escape art”. Instead of trying to defeat guards when discovered, the ninja had to escape as fast as possible before the screams of those that discovered him brought dozens of reinforcements down on him. There are no holds in Togakure-ryu Tonsogata, just ways of breaking holds, tripping and discouraging pursuit. This has been the core to Don Roley’s view on self defense as he teaches now. He has two kids that he is very proud of and will stand and die to defend, and mourns his wife who gave his life meaning. He will rarely turn down a beer if offered one.

Don’s blog can be found at